This week Ricky Gervais tweeted the news story of a Matador attacked by a bull. There were a lot of emotive replies supporting the bull.

In Marriage a Journey and a Dog, the story of the Matador, pierced in the groin by the bull isn’t funny. The stories of the Matador’s extramarital affairs aren’t funny either, but somehow they are. It is the truth behind such incidents that makes the reader smile. I loved writing about different women putting flowers on his grave and his son who decided to become a sewage engineer and inspecting sewers during the Barcelona Olympics, because  somehow it kept him safe from bulls in the streets of Spain.

When Charles Dickens wrote his stories he made the reader feel badly for what was happening, but never said it was bad, and he was a social reformer through writing.

The power of words to change things is great. Stories can influence people. I’m, with Ricky Gervais. I’m against bull fighting, but made a joke of it and I hope it might cause discussion and thought. 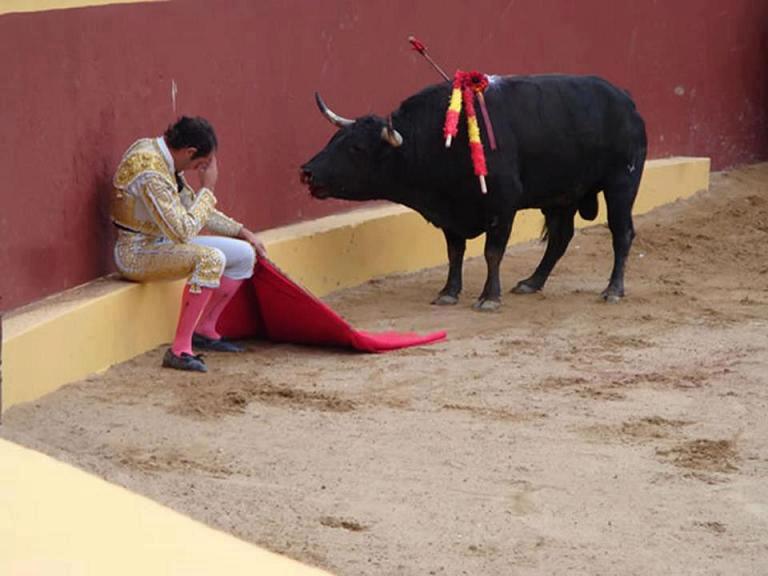 I can understand the excitement of the crowds, and the headiness of the arena, but not the cruelty to the animal. I knew a man who was involved in the finances of bull fighting and he gave a lecture. He spoke about how the bull didn’t feel anything after the first spear accurately entered the neck. Nothing will convince me it isn’t cruel and unnecessary.

I came across this Torero Alvaro Muner’s story on Facebook. He was a matador and this was the moment he was filled with remorse at the suffering of the bull. It changed him into an anti bullfighting campaigner. I found his story on the site of this man.

Researching, even the smallest details can lead onto a trail of interesting discovery. I often have to remind myself that the job in hand is writing.

One thought on “Ricky Gervais and Bull fighting”